Posted on December 29, 2012 by burlingamehistory

McKinley School, with faculty and students, 1929. (Click to enlarge.)

The “First Lady” of our Schools

It all began just after the 1906 earthquake in San Francisco when Burlingame’s population skyrocketed from about 200 residents before the quake, to around 1000 in 1907. At that time, the children of Burlingame were schooled through the county at the Burlingame School on Peninsula Avenue and County Road (El Camino). Burlingame School was built in 1906 and later changed its name to Peninsula Avenue Schools. The residents of Burlingame, however, were not satisfied with a county school and wanted a school they could call their own.

In 1911 Burlingame residents voted on approving the school district and began plans to build a permanent school and well-known architect William H. Weeks was hired to design the school. During the construction a temporary 8-room schoolhouse was built in 1912 on Howard and Primrose called “the little red schoolhouse.”

In September 1913 the first permanent Burlingame School was ready to open its doors to the children of Burlingame. It was located on the corner of Oak Grove and Grange (now Paloma Avenue) and called Burlingame Grammar School. The brick exterior and stunning detail was a fine example of Week’s designs of the times. Columns adorned the front of the school, which became a trademark of Week’s architecture.

McKinley has always been a vibrant school … in the early 20’s there were cookbook sales, Fathers Clubs events, operettas and plays and, of course, many of these traditions are still carried out today. 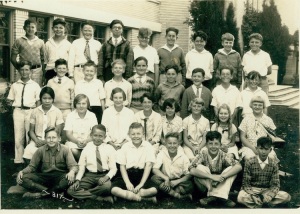 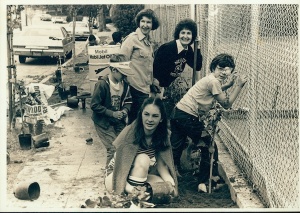 Working to plant and beautify the grounds. c.1970′s.

Inside a classroom sometime in the 1950′s.

About these ads
Gallery | This entry was posted in Burlingame in Pictures, Schools & Churches. Bookmark the permalink.